New research from the University of East Anglia (UEA) highlights areas in Europe and North Africa where construction of Electricity Infrastructure (EI) is likely to increase the risk of collisions for migrating birds.

The study was published in May 2022 in the Journal of Applied Ecology and involved an international team of researchers from 15 countries and organisations which included the British Trust for Ornithology (BTO) and the RSPB in the UK.

Data on the location and size of onshore wind farms used in the study were downloaded from here. The team used GPS location data from 65 tracking studies to understand where certain bird species fly more frequently at “danger height”. “Danger height” is defined in the study as 10-60 metres above ground for power lines and 15-135 metres for wind turbines. By defining these height zones, it allowed the team to identify areas where birds may be more sensitive to onshore wind turbine or power line development. 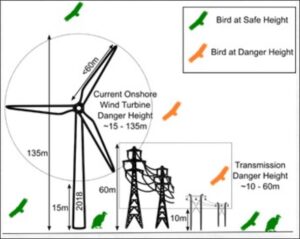 Figure 1: Danger height band definitions for energy infrastructure within which birds could be vulnerable to collision (Gauld, J., et al 2022). The majority of transmission power lines (66 kV and over) range from 10 to 60 m in height (National Grid, 2014). For current onshore wind turbines, the study derived a danger height ranging from 15 to 135 m above-ground from here (Pierrot, 2018; Thaxter et al., 2019)

The study produced vulnerability maps that show collision hotspots are particularly concentrated within important migration routes, along coastlines and near breeding locations. These collision hotspots include the Western Mediterranean coast of France, Southern Spain and the Moroccan Coast, such as around the Strait of Gibraltar, Eastern Romania, the Sinai Peninsula and the Baltic coast of Germany.

The researchers estimated the sensitivity to EI development by “calculating the proportion of GPS flights at heights where birds were at risk of collision and accounting for species’ specific susceptibility to collision”. They then combined the sensitivity data with the locations of existing onshore wind farms and power lines to identify where the vulnerability hotspots are for these birds, for example the zones where they are already experiencing high risk of collision due to the presence of EI.

The GPS data used in this study related to 1,454 birds from 27 different species. Most of the species in the GPS dataset were large soaring birds such as white storks. Exposure to collision risk varied across the different species, with the Eurasian spoonbill, European eagle owl, whooper swan, Iberian imperial eagle and white stork among those flying consistently at heights where they risk collision.