The Creggs Village Plan was launched on the 17th of February at Creggs National School. The launch has been hailed as “a night of celebration” by chairperson of Creggs Rural Development company, Sean Beirne. The Plan was officially launched by Peter Keaveney, Cathaoirleach of Galway County Council. The Plan represents the culmination of three years of work in the local community to map out the future for the coming decades. The purpose of the Creggs Village Plan is to “propose improvements and projects, which will enhance Creggs as an attractive place in which to live, work and visit”. Creggs Rural Development Company liaised with MKO to produce the Plan, with input from the local community and taking account of the existing environment, including heritage features, planning design and concepts.

The project methodology has had regard to ‘The Community-Led Village Design Statement Toolkit’ launched by The Heritage Council in 2012 which sets out a step-by-step guide to undertaking a Community-led Village Design Statement. Numerous consultations between MKO and the local community were conducted, including with pupils in the local national school. The consultation process was largely conducted over Zoom, as a result of the Covid-19 pandemic. Students of Creggs National School carried out a number of exercises about the village including describing Creggs in the year 2050, drawing village maps and hanging tags on a ‘wishing tree’ which contained their wish for the future of Creggs.

The Creggs Village Plan is a non-statutory local development framework, to establish the community’s vision for the future development of their village. As such, the Plan compliments the existing national, regional and local policy framework. With the community straddling the border of both Galway and Roscommon, cognisance also had to be taken of the regional hinterland, where the village is the focus of a vibrant community.

Prior to the launch of this plan, exciting developments are taking place in the village, with progress visible in terms of walking infrastructure and sporting infrastructure at both Creggs RFC and Creggs GAA. Not so visible is the work that has been done in terms of bringing high-speed fibre broadband to the village, and work is now ongoing on the creation of a remote working hub in the Parnell Historical Centre. 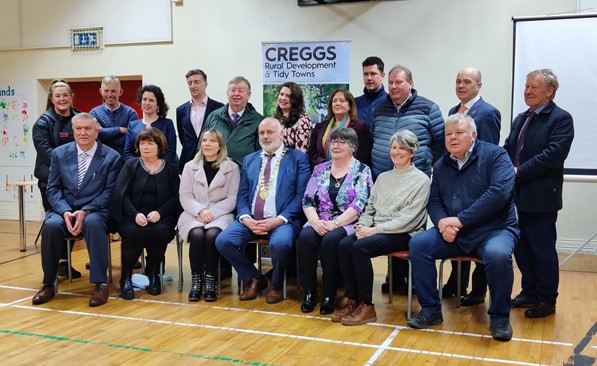