I have been fortunate enough to have been working as a Field Ornithologist with MKO since late June of his year. Before I joined the team, I was working as the Curlew Advisory Officer with the Curlew Conservation Programme in Co. Kerry, which is run by the National Parks and Wildlife Service.

The curlew is Europe’s largest wading bird and is easily recognised by its long, downward curved bill, brown upperparts and haunting call. During the winter, large numbers of curlew can be commonly found along the Irish coastline, with the majority being birds that have migrated from other European countries. These birds are typically present from September until April, although some non-breeding birds might remain in estuaries throughout the year. This has no doubt given some people the impression that the curlew population in Ireland is thriving.

Unfortunately, the native breeding population of curlew has undergone a drastic decline in the last few years. It is estimated that the Irish population has declined by over 97% since the late 1980s, with fewer than 130 breeding pairs thought to remain today. Worst still, the survival rate for any newborn chicks is very low.

The curlew is a ground nesting bird and it traditionally nests on peatlands, rushy pastures and on wet grassland. Birds nesting on bogs are also dependent on grassland for feeding on soil invertebrates such as earthworms. With more intensive agricultural practices being introduced (especially within the last 30 years), such habitats have become severely reduced and fragmented, contributing to the decline of the curlew and other ground nesting birds such as the lapwing.

Changing agricultural practice has also led to an increase in some predators such as hooded crows and foxes, which have adapted well to the altered habitat. With little cover, as well as such a high abundance of predators, it can be almost impossible for curlew to raise their chicks in some areas. 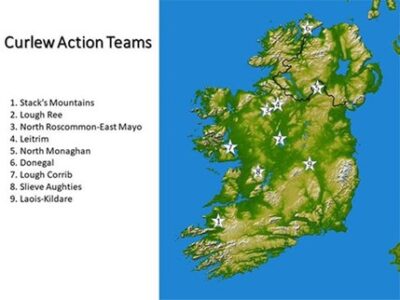 To address this serious decline, the National Parks and Wildlife Service established the Curlew Conservation Programme in 2017. The project focuses on nine areas in Ireland, which have been identified as strongholds for breeding curlew including the Stacks Mountains in Co. Kerry, Lough Ree in Co. Roscommon and Lough Corrib in Co. Galway. Around 30 people are recruited nationally for the project every year to conduct a variety of tasks such as curlew surveys, nest protection and engage with local landowners and communities.

In early 2021 I was hired as the Curlew Advisory Officer for the Curlew Action Team in the Stacks Mountains, Co. Kerry. My role was to conduct and co-ordinate the curlew surveys, record survey effort and results and engage with the local landowners. I was very excited to join the project as I have been following it since it was first set up in 2017.

However, once the field work commenced in March, I began to realise just how serious is the plight of the curlew. Whilst I was observing a range of other upland bird species such as hen harriers and red grouse, there was no sign of any curlew. They are normally site faithful and return to their breeding grounds around late February or early March. It wasn’t until the 9th of April before a pair of curlew was finally sighted. This was the only pair that was located by the team in Co. Kerry, which was down significantly from five breeding pairs in the region during the previous year. The pair were found to be nesting around mid-May and laid a clutch of four eggs. Unfortunately, the pair abandoned the nest two days later and were never sighted again for the duration of the programme.

The National Parks and Wildlife Service recently published the final year report of the Curlew Conservation Programme of 2021. The report highlighted that while the native breeding population is relatively stable in some regions, the future the of the curlew remains very uncertain and precarious, with some regions (including the Stacks Mountains) seeing a significant reduction in the number of breeding pairs.

Whilst the Curlew Conservation Programme has done some significant work and consists of hard working and passionate individuals, more work will be needed to reverse the decline of the curlew. The project has largely focused on predator control, with each Curlew Action Team consisting of two Nest Protection Officers. As difficult as it can be to accept, predator control is necessary if ground nesting birds such as curlew are to have any chance of survival in some areas. Similar projects in the UK (which has also seen a drastic decline in curlew numbers) have drawn the same conclusions. Other actions focussing on habitat management and enhancement will also be central to improve the situation for Curlew.

In 2018, the Curlew EIP was established and co-funded by the Department of Agriculture, Food & the Marine and the EU’s European Agricultural Fund for Rural Development (EAFRD). This three-season project (set to conclude December of this year) focusses on two areas (Lough Corrib South and South Leitrim) and has an organisational group comprised of BirdWatch Ireland, the Irish Natura and Hill Farmers Association (INHFA), the Irish Grey Partridge Conservation Trust and Teagasc. The project has been working closely with farmers to trial measures that focus on preserving and enhancing habitats deemed suitable for curlew.

Furthermore, the agricultural environmental scheme GLAS is providing payment for farmers in any area where curlew have been recorded, to voluntarily manage their lands in a curlew-friendly manner by delivering a suitable sward structure, avoiding machinery operations during the breeding season and avoiding chemical inputs.

The Curlew EIP is set to expire later this year and the GLAS scheme is now closed for future entries and Ireland’s Draft CAP Strategic Plan 2023-2027 (one of its aims being to support and strengthen environmental protection in agricultural settings) has no specific and targeted measures to halt the loss of endangered birds such as the curlew. Further schemes to provide support for conservation measures on a national level will be required. On a positive note, it is encouraging to hear that the Curlew Conservation Programme will resume next year.

I certainly valued my time on the project and feel it prepared me for the very interesting work I am now doing with MKO.