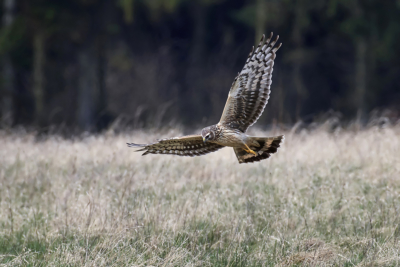 Hen Harrier Circus cyaneus are medium sized birds of prey. Recent studies have shown prolonged declines across its range; hence hen harrier is listed under Annex I of the EU Birds Directive (European Council Directive 2009/147/EC) and is a species of European conservation concern. Irish hen harrier is of national conservation concern as a result of the small and declining populations recorded currently.

In Europe, hen harrier use upland habitats, particularly heather moorland and bog, during the breeding season. The recent degradation and land-use changes across these preferred habitats have led to the species also using pre-thicket coniferous forests. These forests provide favourable conditions for foraging hen harrier during early growth stages but become less useful to the species as the volume of foliage increase towards the end of the pre-thicket, eventually becoming un-useable completely. Anthropogenic land-use changes in upland habitats such as illegal burning, afforestation and forest management can negatively affect the species through disturbance and or habitat loss. These factors can lead to territory and or nest desertion, changes in adult behaviour, reduced breeding success and impairment of chick growth.

In Ireland and the UK, forest expansion across traditional open heath and blanket bog hen harrier habitat in the uplands have been associated with population declines. Furthermore, research shows that although pre-thicket coniferous forests are becoming increasingly important landscapes for hen harrier the habitat is sub-optimal for the species and may negatively impact breeding success. To minimise negative impacts on the species, sensitive planning and management of commercial forestry must be put in place.

A recent study carried out in UCC (Caravaggi Anthony et al “Forest management and Hen harrier Circus cyaneus conservation in Ireland” Irish Birds 2020) aimed to investigate the potential role of forest management in enhancing the habitat values of forests for hen harrier in Ireland.  The study focused on habitat mosaics that are associated with hen harrier territories and beneficial management options for the conservation of the species. The results of the study demonstrated that breeding hen harrier territories in Ireland are associated with a considerable number of unsuitable agriculture, pasture and post-thicket forest habitats. Hen harrier are unable to hunt in these landscapes and so, birds may be forced to travel further during the breeding season to meet the nutritional needs of their growing chicks. This in turn leads to increased exposure of the nest and chicks to predation and stochastic weather conditions. The study outlines the importance of maintaining heather moorland, bog and shrub mosaics near territory/nest sites. These effective foraging corridors provide good hunting opportunities for the species meaning adults spend less time away from their nests. Other beneficial forest management options suggested in the study included strategic selective clear-felling to create a semi-structured age mosaic within a forest and enhancement of connectivity of forested habitats to open habitats.

Forest expansion is projected to increase from 11% to as much as 18% by 2046. This expansion is expected to further limit foraging opportunities for hen harrier, ultimately reducing their reproductive output. To minimise these negative effects, it’s critical that forest management planning for hen harrier conservation aims to maintain important areas of pre-thicket forest cover and exclude areas of heather moorland, bog and shrub from future forestry planting.