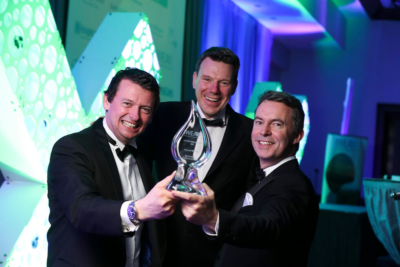 The second annual Irish wind energy awards were held in Dublin on Friday last, with MKO scooping the ‘Consultant of the Year’ award along with the award for ‘Overall Winner’ on the night. Over 400 people attended the awards held in Clontarf Castle, on what is now firmly established as a key event in the Irish wind energy industry’s calendar.

Organised by IWEA, the Irish Wind Energy Association, the awards recognise expertise and achievements across 12 categories, from Best Project, to Person of the Year and Best Original Technology, amongst many others.

MKO was shortlisted along with Jennings O’Donovan and Ionic Consulting for ‘Consultant of the Year’, with the award being sponsored by Vestas. MKO is delighted to have been selected by the independent judging panel and Michael Watson and Jimmy Green took to the stage to accept the award from Gary Crowley of Vestas, on behalf of the entire MKO team.

The independent judging panel then selected an Overall Winner from the twelve award winners on the night. MKO was again selected for this award, which was a really welcome surprise. Brian Keville and Michael Watson were presented with the award by Kevin O’Donovan of award sponsors, Statkraft.