Microsoft pledges to be carbon negative by 2030 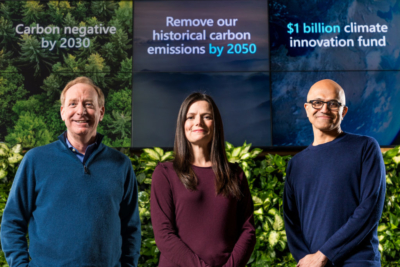 Microsoft made headlines in mid-January by announcing it would become carbon negative by 2030, and by 2050 would remove all its historical carbon emissions from the atmosphere. Along with other tech titans such as Google, Facebook and Amazon, Microsoft have been attempting to increase their use of renewable energy in recent years, but the pledge to go carbon negative and beyond is a first for a company of Microsoft’s scale.

In making the announcement, Microsoft highlighted how the world’s climate experts agree that the urgent action must be taken to bring down emissions, and ultimately, we must reach “net zero” emissions, meaning that humanity must remove as much carbon as it emits each year.

Microsoft has pledged to be carbon negative by 2030, and by 2050 to remove from the environment all the carbon the company has emitted either directly or by electrical consumption since it was founded in 1975. The plan starts with an aggressive program to cut the company’s carbon emissions by more than half by 2030, both for its direct emissions and for its entire supply and value chain.

The company also launched a new $1 billion climate innovation fund to accelerate the global development of carbon reduction, capture, and removal technologies. Beginning next year, Microsoft will also make carbon reduction an explicit aspect of its procurement processes for its supply chain. The company’s progress on all of these fronts will be published in a new annual Environmental Sustainability Report that will detail its carbon impact and reduction journey.

In industrial, climate, economic and social terms, it is a bold move, and a very necessary one.