A multispecies tracking study recently has identified a major hotspot for pelagic seabirds in the subpolar frontal zone of the North Atlantic Ocean. Using tracking, phenology and population data, the abundance and diversity of 21 seabird species were mapped. This area is approximately 595,000 km2 in size and is used annually by up to 5 million seabirds from at least 56 colonies in the Atlantic. This is the first time a seabird aggregation of this size has been documented in the high seas.

Of the 21 species observed using this hotpot, five are globally threatened: Bermuda Petrel (Pterodroma cahow) , Zino’s Petrel (Pterodroma madeira) and Desertas Petrel (Pterodroma deserta), Kittiwake (Rissa tridactyla ) and Puffin (Fratercula arctica). Of the 21 species, four are listed under Annex I of the E.U. Birds Directive (Cory’s Shearwater (Calonectris borealis), Manx Shearwater (Puffinus puffinus), Bulwer’s Petrel (Bulweria bulwerii) and Arctic Tern (Sterna paradisaea)) and three are on the red list (high conservation concern) of Birds of Conservation Concern in Ireland, 2020-2026 (Kittiwake, Puffin and Razorbill (Alca torda)). The Little Auk (Alle alle) was the most abundant species using the area from January – March with numbers of 2.3 million. Great Shearwater (Ardenna gravis) were observed to use the hotspot in large numbers of at least 1.5 million between April and September. The researchers found three species (South Polar Skua (Catharacta maccormicki), Long-tailed Skua (Stercorarius longicaudus) and Sooty Shearwater (Ardenna grisea)) with over 50% of their global populations using this area as a winter staging ground, while 45.8% of the endangered Bermuda Petrel population use the area between July – September. Many of the species recorded in this study travelled large distances to use the area, with some using the hotspot year-round, indicating consistently high food availability.

Most seabirds used this hotspot during the non-breeding stage, a poorly protected period in the seabird lifecycle. The researchers suggest year-round protection at this site, as 17 of the 21 species are undergoing population declines and face marine-based threats including bycatch, overfishing, energy production and mining, pollution, and climate change. These threats, with the exclusion of climate change, can be reduced by area-based management. The area is now under consideration as a marine protected area by the OSPAR Commission. 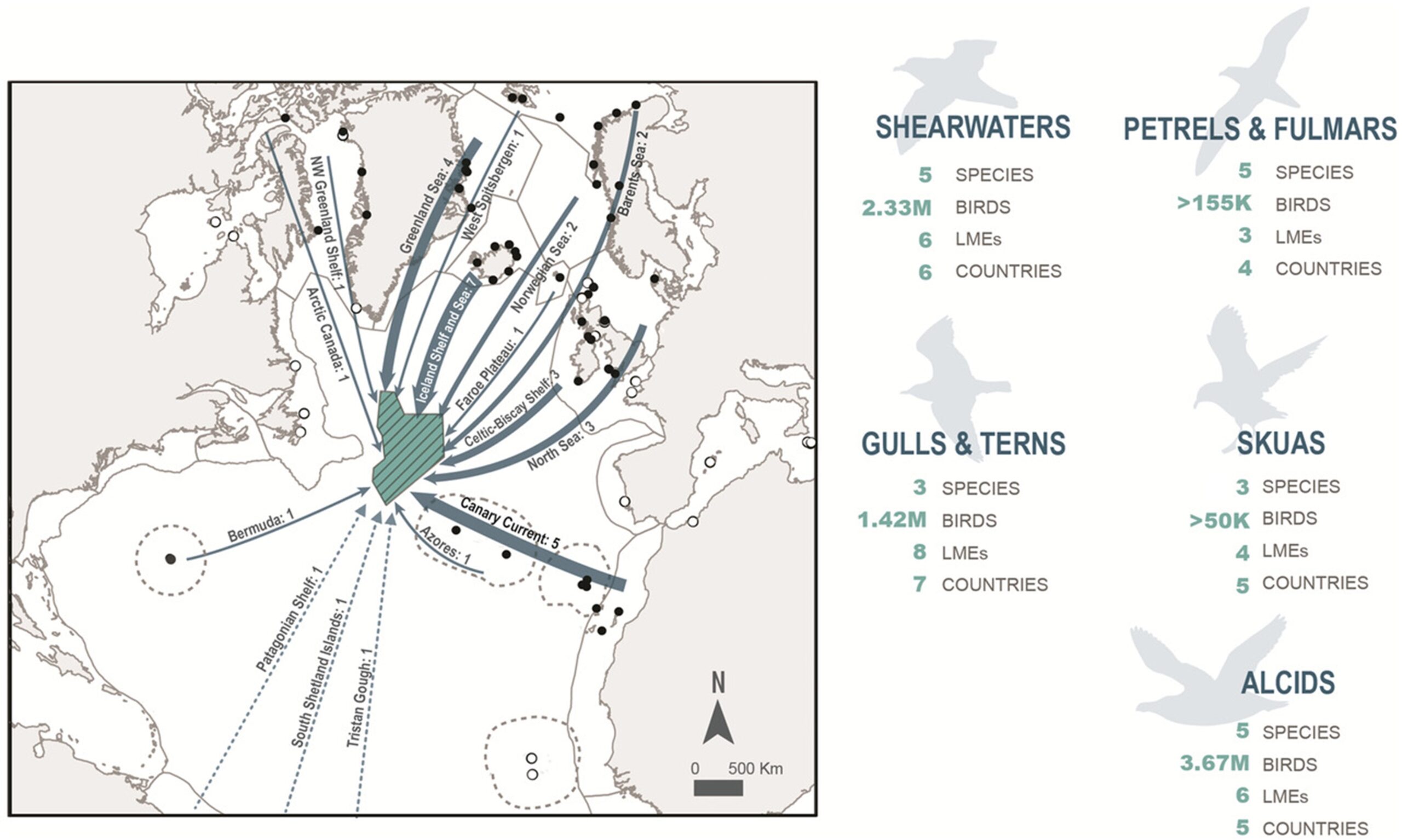 Figure 1: Location of identified hotspot in the middle of North Atlantic (green) and summary information of species groups at the site. Arrows indicate the large marine ecosystems (LMEs) the birds are traveling from to the site, labelled with LME name and number of species. Dashed arrows are from LMEs in the South Atlantic (not visible on the map). LMEs are shown by a solid grey line, with a dashed grey line for adapted LMEs (Azores, Bermuda, Cabo Verde, Madeira; the latter analysed with the Canary Current LME). Colonies are shown in circles (black = data used in analysis, white = data considered but not included in final analysis). Figure from Davies et al. 2021.

The full journal article can be found below: